Home / About Us / Demetrios Zacharopoulos

Demetrios Zacharopoulos is a partner with the Flint Law Firm, LLC in Baltimore. The firm specializes in litigation and trial law, and Zacharopoulos works with victims of asbestos exposure in particular. He has been a part of cases that resulted in record verdict amounts for asbestos victims. He is admitted by the bar to practice in Maryland and in the U.S. District Court for District of Maryland.

As a litigator with the Flint Law Firm, Zacharopoulos has spent his career helping victims. He devotes all of his professional time to litigating and is experienced in helping victims win in court. His cases include personal injury and toxic tort, but he mostly works with people who have developed mesothelioma and other illnesses related to asbestos.

Zacharopoulos learned a strong work ethic from his Greek immigrant parents and now uses it to help victims. He always has the clients’ best interests in mind and maximizes the damages they receive. He was honored for his accomplishments from 2009 to 2015 by being named a Thomson Reuter’s Maryland Super Lawyers Rising Star. 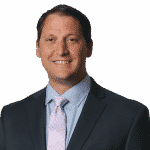