Home / About Us / Chris J. Panatier

As a trial lawyer Panatier focuses on advocating for victims of toxic exposures. His areas of practice are toxic torts, asbestos exposure and mesothelioma, products liability, pharmaceuticals, commercial disputes, and catastrophic personal injury and wrongful death.

In similar cases advocating for victims Panatier has helped to win significant compensation. His peers have recognized this work with numerous awards and distinctions. He was named a Texas Super Lawyer from 2013 to 2018 (a Thomson Reuters service), was recognized as a Top 40 Under 40 National Trial Lawyer by National Trial Lawyer sin 2012, and was named a Texas Rising Star by Thomson Reuters from 2005 to 2012. 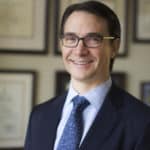